Continuing the stream of polish posts I want to address some inconsistencies that we’ll have to bring upon you to improve the overall SMBX2 experience. These changes aren’t going to break anything, but it’s best to be aware of them and take measures to consider them early on.

The 1.3.0.1 update brought a few changes to basegame graphics. Most notable were the changes to various sizeables, as well as changing tilesets to use the AllStars colours, rather than the Advance colours. In Beta 4, we’re bringing two big changes to vanilla tiles:

The SMB3 cave tileset has, honestly, never even been using the SMB3’s pattern. We weren’t able to figure out how the current tileset was constructed, but we figured we should update it to properly resemble the source game.

The other change involves various sizeables in the game which we’ve changed for one reason or another. Most of these have their bottom segment changed to prevent cutoff, allowing them to be placed in midair or as part of a ceiling. Others had their bottom segment adjusted to better fit with the style of similar tiles (SMW sizeables). The airship block in the bottom right has been reverted to its SMBX 1.3 appearance, as that appearance suited its intended environment better.

The important takeaway from these updates is: Some of these blocks’ masks are changing! This is important in cases where you (or someone else) make a custom .gif graphic for a block and decide to not copy its mask over, since it matches the basegame mask (we’ve seen this with switch blocks in beta 3). Furthermore, we encourage you start sticking your sizeables one tile deep into the ground if you want them to stay grounded: 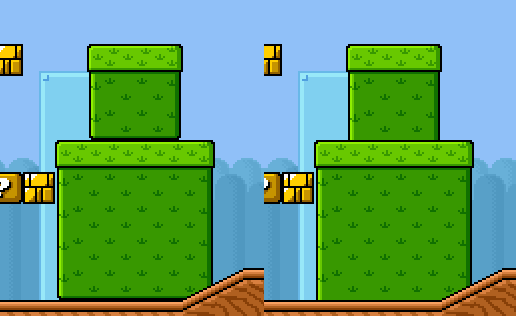 Don’t worry, due to how SMBX sorts its blocks you won’t run into layering issues with this!

You might’ve noticed that, on the Claims Sheet we have marked the NPCs from Beta 3 as “Pipelined”, rather than “Already Included”. This is because they’ve all seen rewrites or tweaks which change their behaviour in one way or another. These inconsistencies are minor, so it’s unlikely that anything will suddenly stop working on your end, but here are a few things to be aware of:

Beta 3 had a lot of costumes for every character. Looking forward, it’s going to be impossible for us to keep up with all of these, especially when new powerups get added in the future. We’re not throwing all costumes out, just the ones which are unlikely to ever see use anyway. In addition to this, Megaman’s default spritesheet has now changed from his 8-Bit design to his 16-bit Wily Wars design. The 8-Bit design was moved to a costume, in light of the 16-Bit one meshing better with the usual SMBX level. Our characters are subject to bigger changes, but most of these will come with Beta 5. Here’s a video of Megaman in action:

That’s all for today! Make sure to check your levels if anything from this is going to affect them. I’m gonna leave you with a video of Mario picking up ghosts from a boo circle:

5 Replies to “Preparing Yourself For Updates”